I am originally from the rural Appalachians, specifically western North Carolina, as far west as you can go without having a Tennesee address. In that region, small and some not so small, home vegetable gardens are the norm not the exception. Many people raise enough so that they can preserve their bounty through the winter. Freezing, canning, and storing root vegetables in a cellar or "can house" dug into a bank behind the house is a way of life. When I was growing up potatoes came from a potato box in the back of the can house instead of the grocery store, and a "can" of tomatoes was a quart mason jar not a tin can.
As I have gotten older, and prices have gone through the roof, I have really started missing the old days. Unfortunatly, I live in a very populated portion of eastern North Carolina, and I live in a subdivision where space is at a premium. Even with these obstacles, my wife and I decided to dedicate a portion of our backyard to grow a few vegetables. I am not planning on surviving on what I grow but if I just get a little to subsidize what we buy at the grocery I will be that much ahead of the game. I also know excatly how these vegetables are grown, what fertilizers and pesticides were, or were not, used. So I guess in the long run I would say that I would rather grow food instead of grass!
So far we have planted tomatoes, onions, peppers, potatoes, asian melons, squash and cucumbers. We also plan to plant cool weather crops in the fall as the climate here is really mild and we should be able to have cool weather crops almost all the way through the winter months. 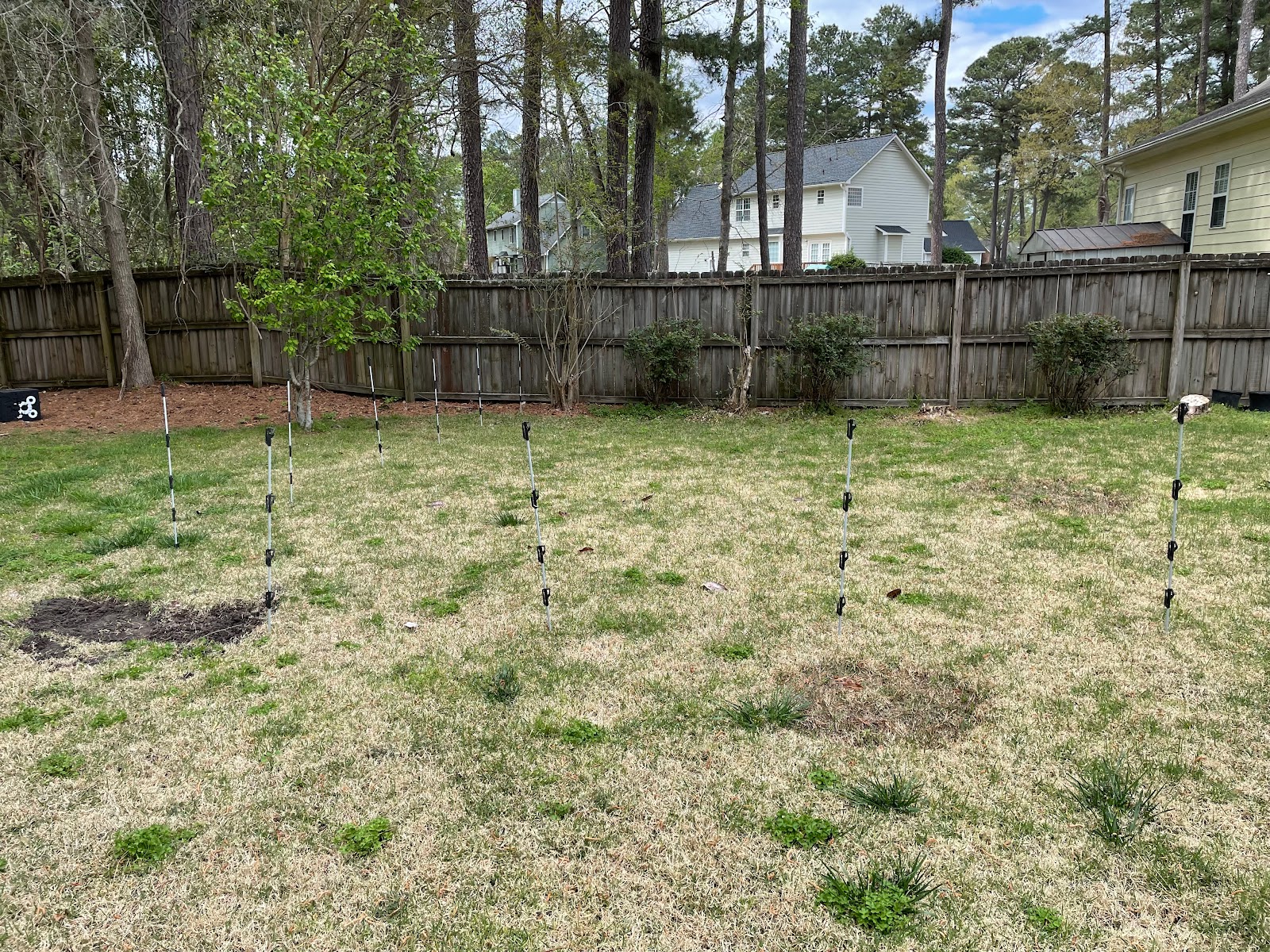 Our yard before clearing the ground. At first I was going to try to move the sod, I soon realized that was going to be too time consuming and I needed get plants in the ground so I abandoned that idea and just tilled and raked up the grass. 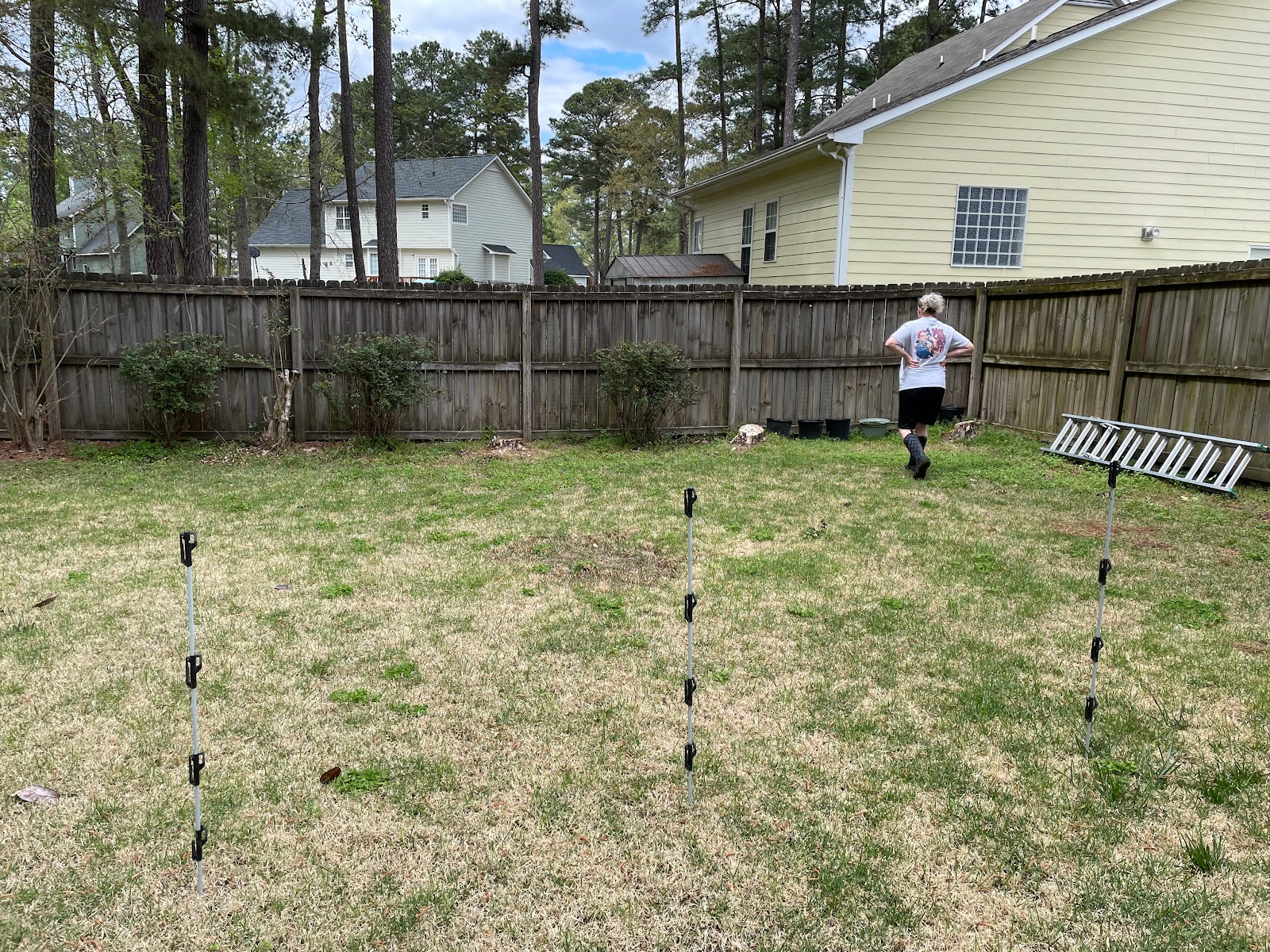 Tammy, my wife, surveying the project. 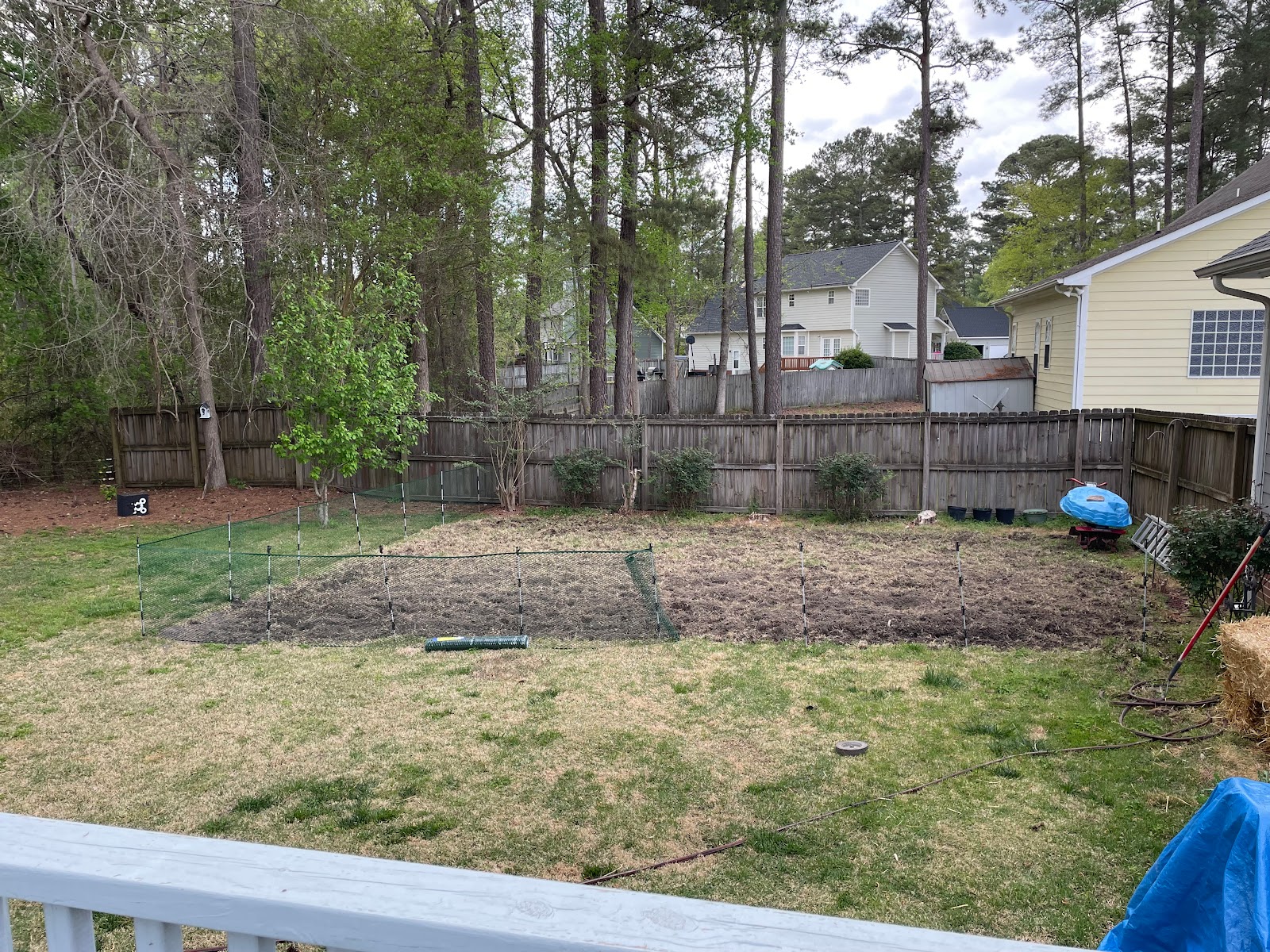 The ground is tilled and most of the grass raked out, also, the fence is almost up. We have to have a fence due to pets that would love to get into the garden and dig and play in fresh tilled soil. Also, there is a swamp behind my house that is full of rabbits that will eat plants about as quick as you plant them. The fence is a simple plastic mesh and fiberglass poles that we purchased at Tractor Supply. 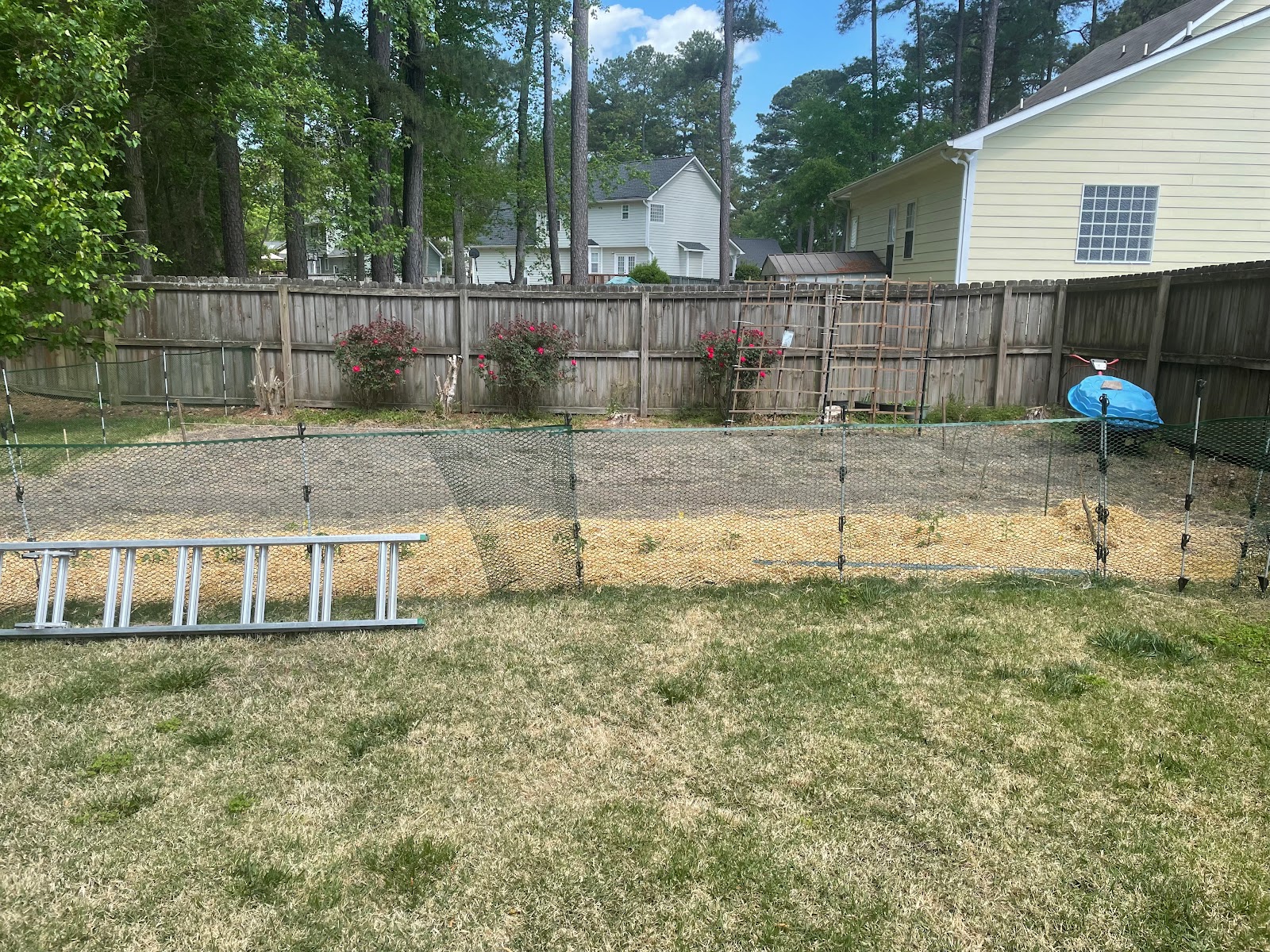 Garden is started and everything is planted. 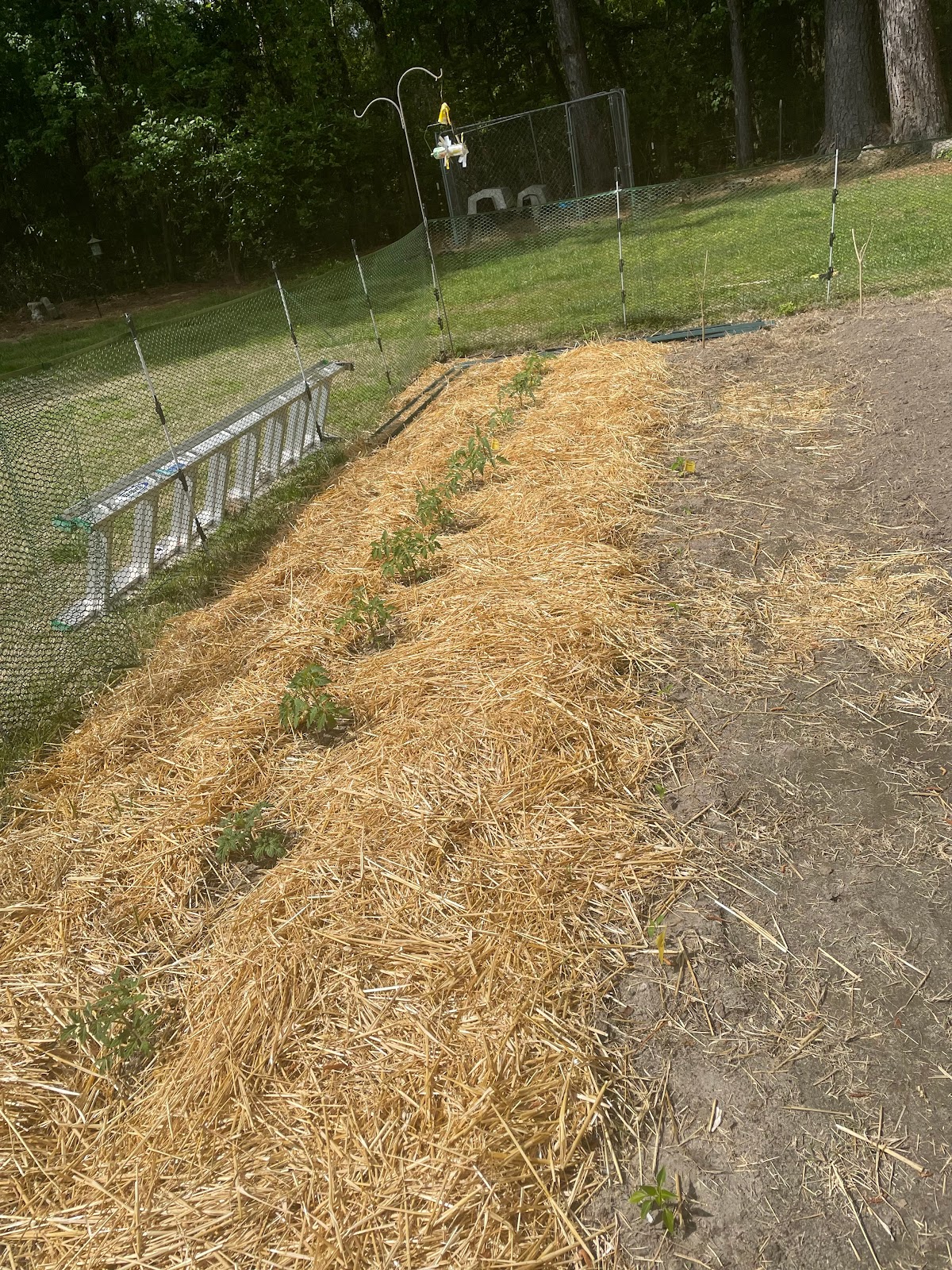 One row of tomatoes and another row of peppers. I can taste the tomato sandwiches already! The whirly gig you can see on the stand was made from soda cans by one of Tammy's patients and spins at the slightest breeze. We thought it would be just the thing to maybe keep critters scared out of the garden. 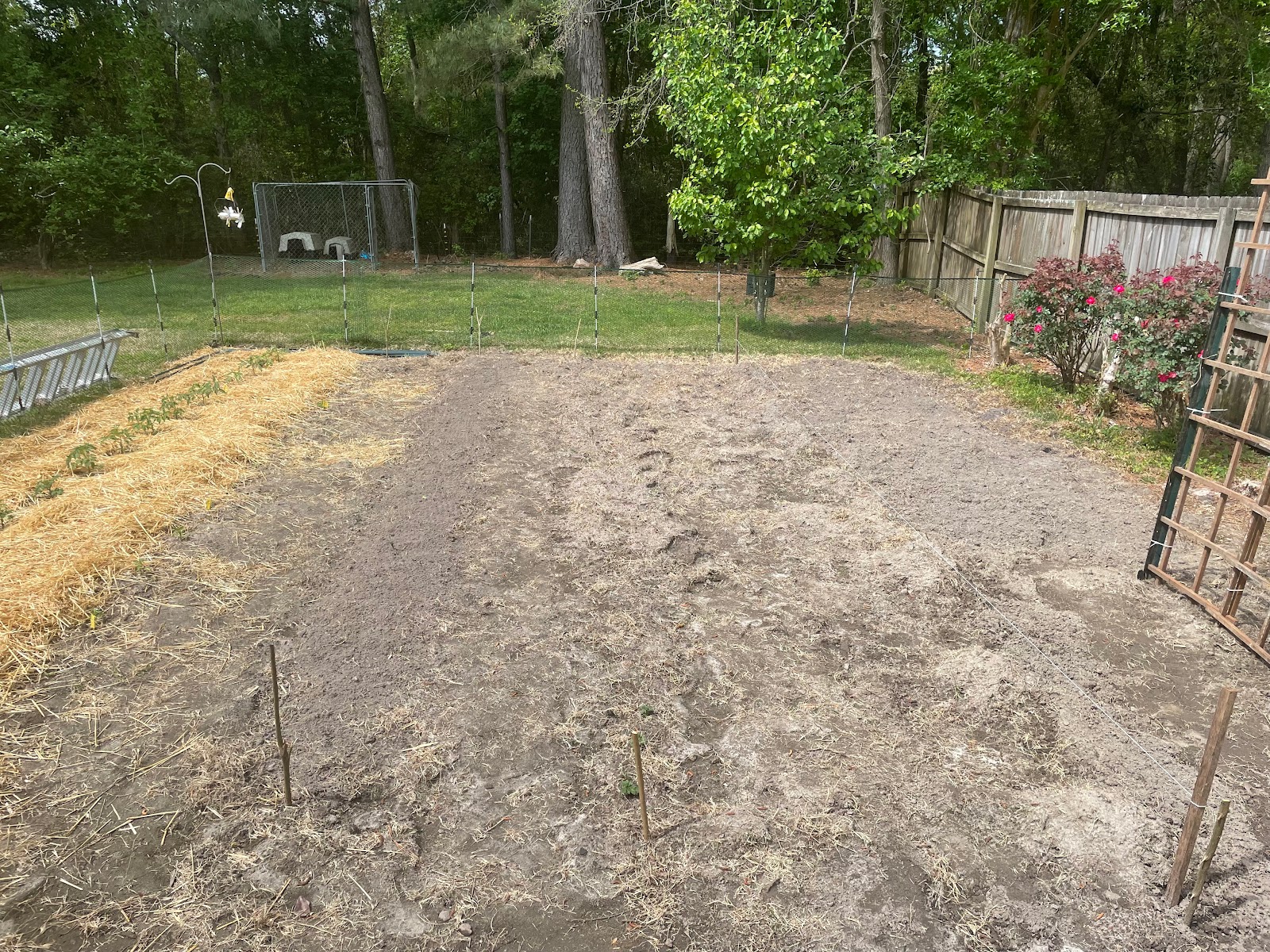 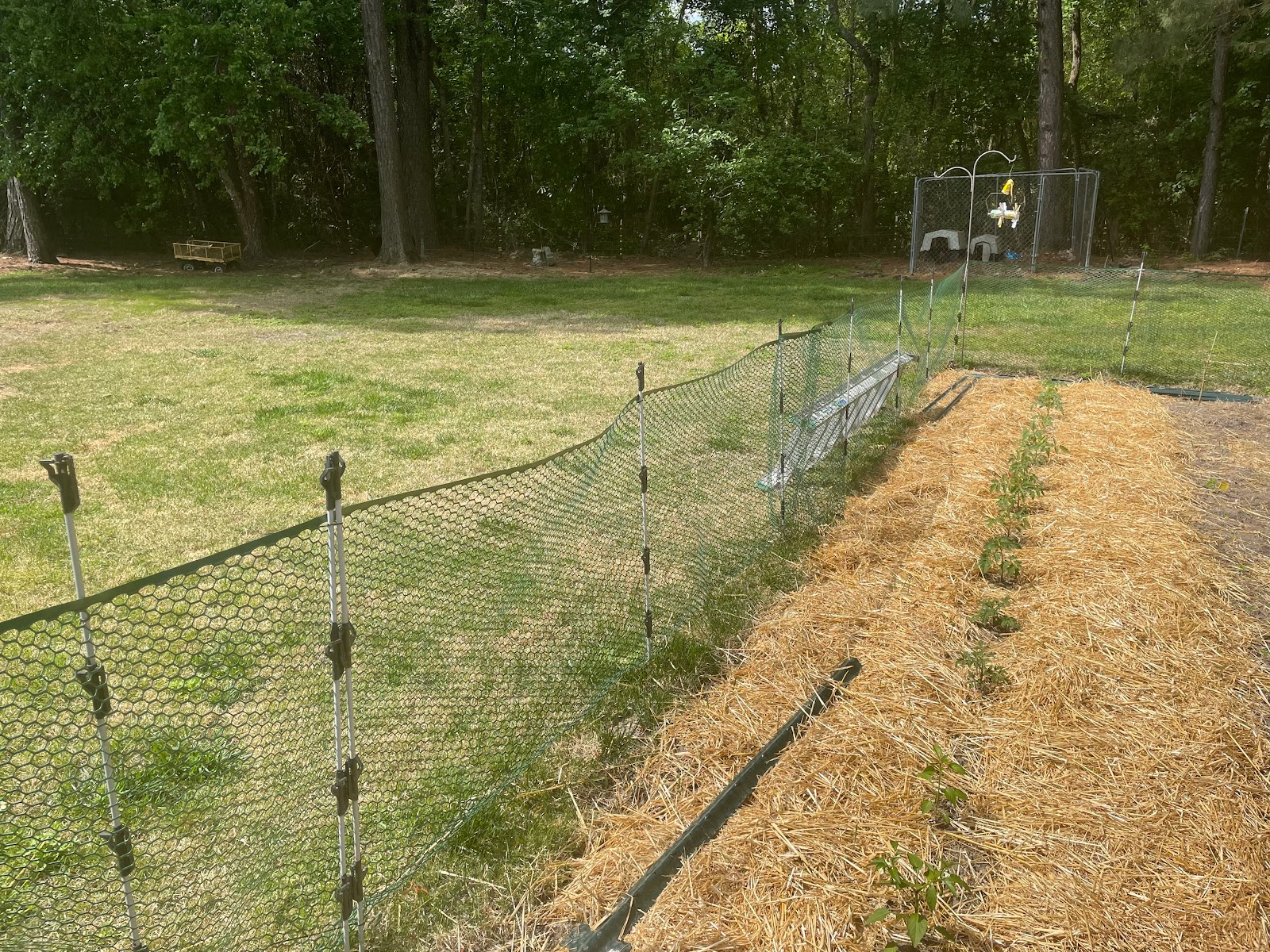 Close up of the fence. 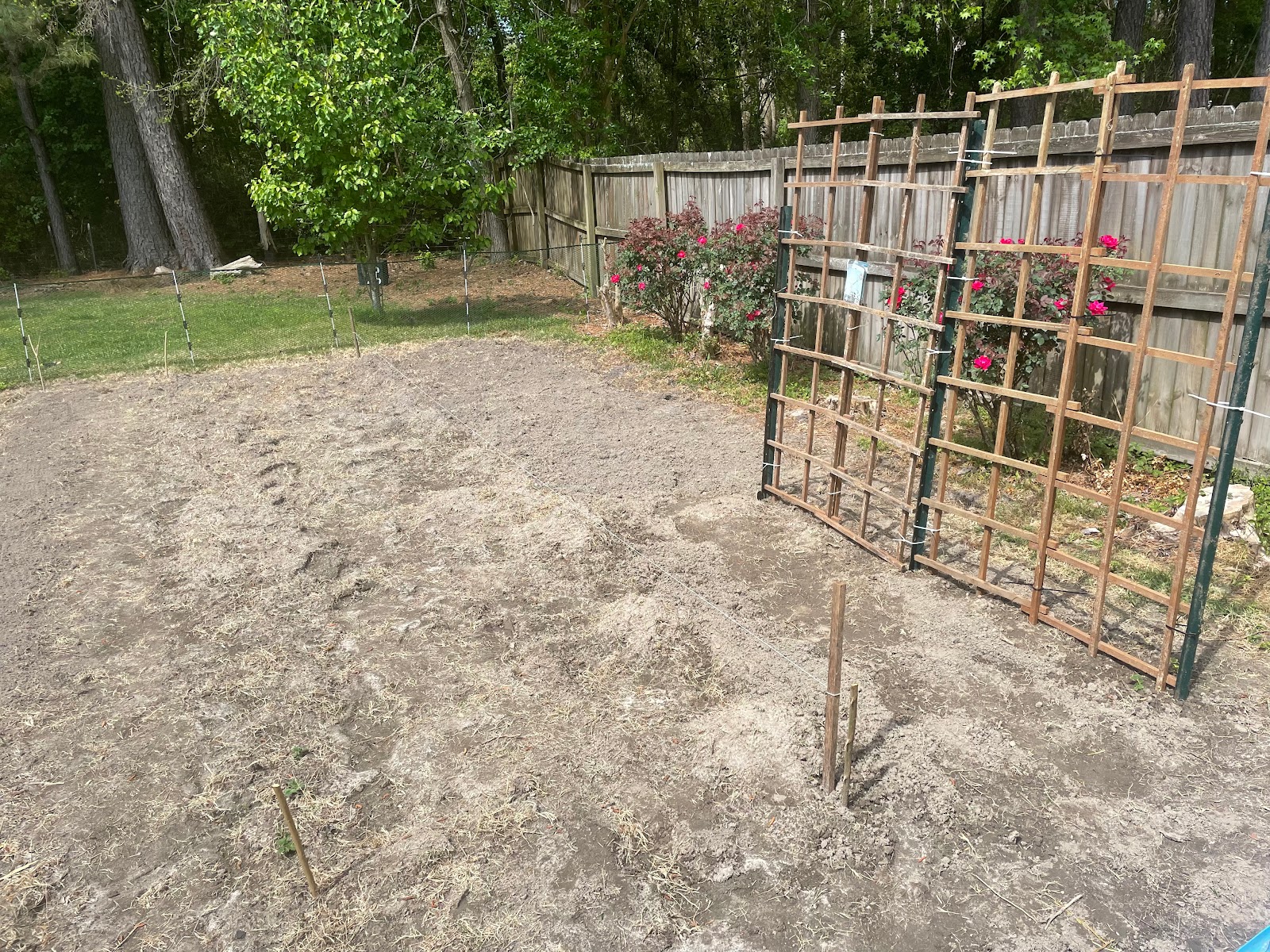 And a close up of the trellis, with just a few potatoes starting to poke their head up. I got these out a little late but hopefully they will make something.
I will continue to update as the plants mature and let everyone know how successful we are at this venture. Thanks for reading and stay tuned for updates.