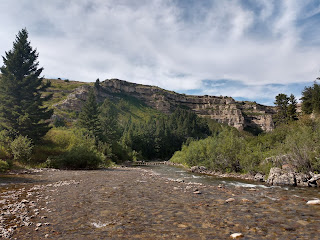 In my last post, I talked about my recent fishing and camping trip to Montana. I have had so many people ask about the gear that I used I decided to write a separate post. 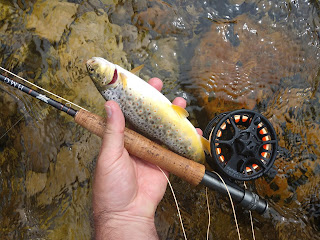 I took three rods to Montana, a nine-foot Sage VXP four weight,  eight-foot six-inch Redington Classic Trout three weight, and an eight-foot Fenwick HMG four weight.  The lion's share of work went to the  Fenwick, which is paired with a Lamson Waterworks Liquid reel and Cortland 444 Peach double taper three weight line.  The Fenwick has been my go-to combo for the streams that I fish here in North Carolina. In an earlier post, I talked about why I target smaller streams in Montana, you can read about that here. I never felt under-gunned with the four weight Fenwick even with the big boy in this picture. 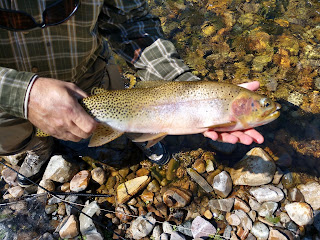 This time of year in Montana is the terrestrial season, hoppers, beetles, and ants were the go-to flies. I used a lot of stimulators like the one in the picture, orange seemed to be the hot color. 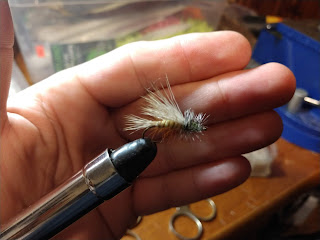 I tied these stimulators on a Tiemco size 12 TMC 200r hook. When the fish were slow on top I switched to nymphs, using a New Zealand style wool indicator and various nymphs. I had the best luck on bead-head Frenchies, the fish in the picture below was caught on a size 18 Frenchie. 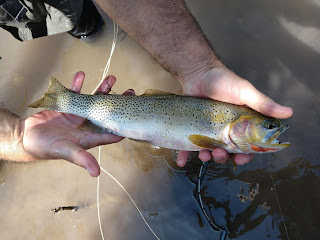 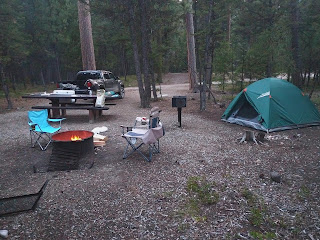 All of the camping on this trip was car camping which made the gear selection simple.  The tent we used was a cheap, NTK brand, dome-style tent.  I am a fan of these tents for the money. They have a full coverage fly and are made very sturdy. My only issue with these tents is that the ventilation is not stellar. If you close both of the vestibule doors you will have some condensation issues. An easy remedy is to leave the doors unzipped in drier weather. For bedding, I used a Thermarest Z-lite foam pad with an Outdoor Labs inflatable pad on top. I learned my lesson last year when I only had the inflatable and it went flat on my first night. The story of that trip is here. I was able to find the hole and patch it and it has been going strong ever since. I probably have close to 15 nights on this patched up pad with zero issues. I used an Enlightened Equipment Revelation 40-degree quilt and stayed nice and warm. There was one night when the temperature dipped down close to 40 and I had to put on my thermals. 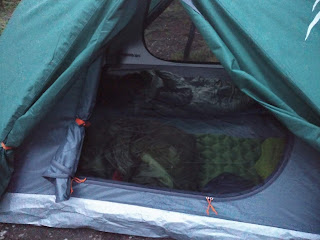 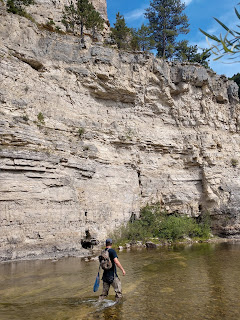 I think this just about covers it. If anyone has any questions or needs more detail, feel free to hit me up in the comments. Thanks for reading, Chris