A few days ago I was down at my parents house for a visit. Me and me father were sitting around reminiscing and talking about fly fishing years ago and Dad said "hold on a minute, I found something the other day you might be interested in." He went downstairs and rambled around for a minute and brought up this old rod, complete with a Martin automatic reel on it. I recognized it instantly even though it has been over 30 years since the last time I saw it. It was the first rod that I ever fly fished with and what I learned to cast and catch fish with. 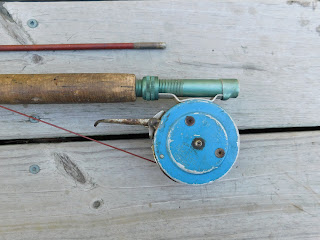 This story starts in my Grandfather's basement in about 1979 or 1980. Jody, my grandfather, had a full basement under his house and to a 12 year old boy it was one of the most magical places on earth. It was full of old fishing gear, camping gear, tools and tons upon tons of interesting things to prowl around in. On one of these plundering expeditions I found this rod. It was old then, the Wright McGill Eagle Claw badge on the cork grip was already missing and the thread was rotting on the guides and one was completely missing. I took it upstairs and asked Jody if I could have it and of course he said I could. I also asked how I could put the guides back on so we sat down at the dinner table and he showed me how to wrap the guides on with string and whip the ends under. 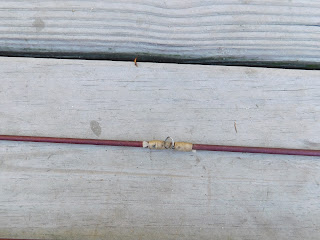 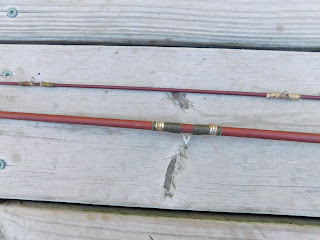 I rewrapped all the guides but one and was pretty proud of the job I did, although looking at it now they are crooked as a dog's hind leg but to my credit they are still on. I don't think Jody thought that I would stick with fly fishing but I was hooked from the beginning. I did not catch any trout but caught buckets of bluegill. I bought commercial flies that came in a blister pack and fell apart after a couple of fish and my leader was just a piece of 6 pound test tied to an overhand knot in the end of the fly line but with that old rod I wore out any water I could get to on my bike or walking.

I fished with my rescued rod for a year or so and I guess Jody took pity on me and bought me a brand new, bright yellow Wright McGill Eagle Claw rod and an upgraded Martin auto that was a low profile side mount reel, which I fished with for several years and caught lots of fish with. I broke that rod in the hatch of my 1976 Toyota Celica and almost cried, felt like loosing a good friend.

In the last 40 years I have had many different rods and fished in a lot of different places but this old dilapidated Eagle Claw is what started it all. I am going to leave it just like it is and put it on the wall where I can look up at it every once in a while and remember what a journey it has been.