6 Flies I Can't Live Without

Adams, Comparadun, Elk Hair Caddis, Stimulator, Gold Ribbed Hair's Ear and last but not least, Pheasant Tail. Dang that was the quickest post I have ever written!

Yeah, but it just really is not that simple. Yes those are the base patterns that I fish 95% of the time but I tie many variations of each one. Sizes, colors and shapes all change to represent a different insect or phase of an insect. For example I tie a "yellow sally" style stimulator. It is a normal stimulator except it does not have the normal deer hair tail but just some wraps of red thread on a size 12 or 14 hook and a yellow body. Other than that it is just like any other stimulator. Does it look like a big ol dark stimmy tied on a number 10 hook to imitate a stonefly? Not in the least, but it is still a stimulator.

I only mentioned 2 nymphs but it is so easy to tie these a little larger or a little smaller, fuzzier or buggier, I am pretty sure that is not a word but whatever, to tailor them to the conditions you are fishing. Are they still a pheasant tail and a hair's ear? I have no idea.

If you are an aspiring fly tier and can tie passable copies of these patterns I honestly think you can just about cover any fishing eventuality.  I know some more proficient tiers will look at the amateuristic flies I posted in the original pic and be amazed that I ever catch a fish, I do find dumb fish I think, or maybe just really hungry fish. 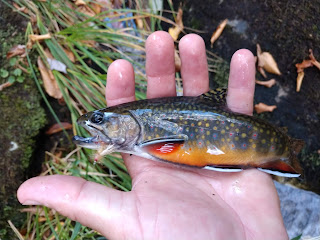 Thanks for reading, Chris