Me and a good friend of mine have been whining and crying lately about the seemingly never ending winter, which is actually pretty common for us this time of year. So last week Kevin just said to hell with it let’s hit the woods, that was all the encouragment I needed! We decided to go to one of our favorite streams on Saturday and stay till Tuesday. I started to get gear together and check the weather constantly. Weather looked chilly but doable, highs in the 50s lows in the 30s. It has been much warmer but when we were able to get together for this trip a cold front moved through. With the cold front and the higher than average rainfall I did not expect the fishing to be very good but we were ready to get out and get some mountain time in. 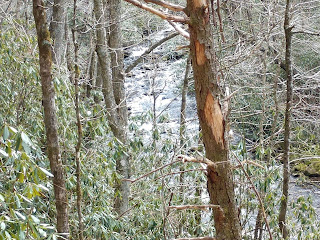 Kevin and I both have substantial drives to get to the trail head so we decided to meet at noon on Saturday to walk in. One look at the stream driving in and I knew fishing was going to be rough, the creek was running clear but very high, about as high as I have ever seen it except right after a heavy rain.  We weren’t depending on fish to eat and this trip was more about getting out for the first time than anything but I was still hopeful that we would pick up a fish or two. We suited up, put our packs on and headed up the trail, expecting colder weather my pack was heavier than usual weighing in at just under 30 pounds. That combined with winter legs had me worrying a little about the walk in. This was a short hike of about three to five miles, I say three to five because we did not know exactly which spot we would end up camping in. Also on the walk in it is up hill the entire way, not a particularly steep grade but up hill none the less. No problem at all with the walk in, my treadmill miles had paid off and we decided to camp at the three mile site because it is a nicer camping area, we already knew exactly which trees to hang our hammocks from. 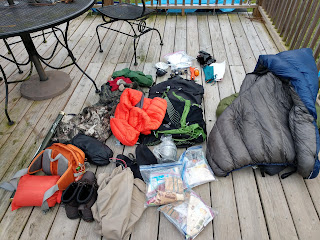 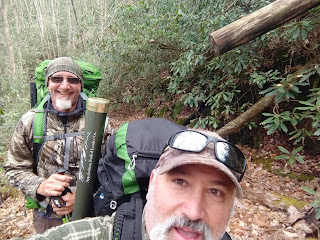 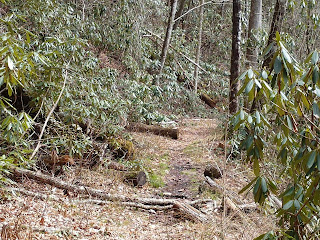 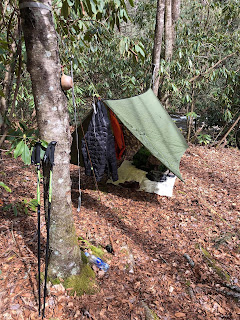 We quickly got our hammocks set up and started to gather wood for a fire, this was supposed to be the coldest night of the trip down to the upper 20s. It was already down into the 30s and dropping fast. Since we got a late start neither of us fished that first evening. We ended up just sitting around the fire and catching up, I had not seen Kevin in several months so we had a lot stuff to catch up on. We ended up going to bed at around 9 and the temperature was already down to about 30, I was starting to think that the weatherman may have missed it a tiny bit. My sleep gear consisted of an Enlightened Equipment Revelation top quilt rated to 20 degrees and a three season Jacks R Better under quilt. I went to bed and wore fleece long johns and wool socks and was a bit nervous about staying warm. My gear performed fantastic and I had a restful and comfortable nights sleep even though it was colder than expected and 24 degrees when we got up. 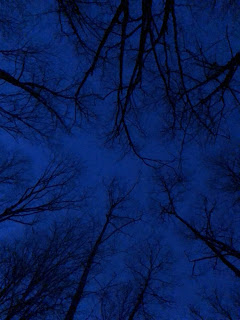 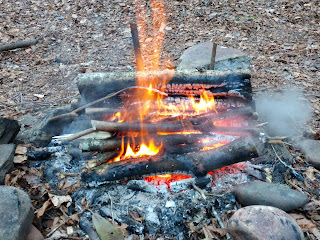 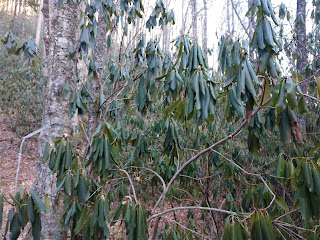 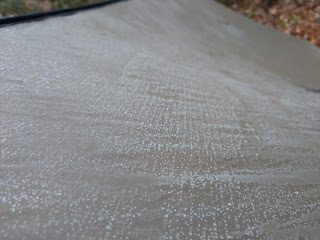 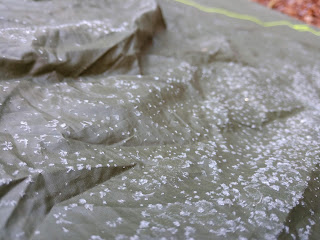 The plan was to get up and hike another two miles to try to get to a point where the higher than normal flows would be more fishable and easier to wade. Kevin and I got our fishing gear together and walked up the trail to the spot we wanted to try and started fishing. The plan worked….halfway. The creek was lower and more wadable but the fish were not cooperating at all. We fished for about an hour with not a hint of a bite so decided to just head back to camp and relax for the day. Sitting around camp we got to talking about one of the tributary streams that we had crossed and wondered about fishing it. If you follow my blog you know how I love blue lines and exploring new country so we decided to do a quick reconnoiter. One of the first casts pulled this little guy out and we made a plan to fish it the next day. 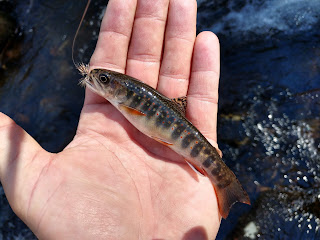 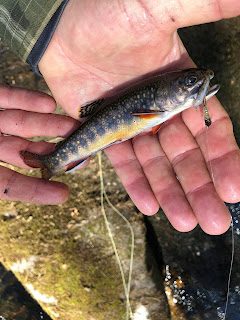 The next day dawned the same as the first except colder by one degree with a high blue sky, not picture perfect for fishing at all. We were determined to explore this stream whether we caught anything or not. I am glad we did, this stream turned out to have a lot of potential and one that I will keep in rotation. We did not catch a tremendous amount of fish and no big ones, 8" and above, but I caught enough under these less than perfect conditions to let me know this creek will be fun on a good day. I also hung one fish that was very nice, looked to be in the 9" range, so I'm sure the bigger ones are there. Even without these gorgeous little fish the stream was awesome to climb and explore with tons of plunges and waterfalls. 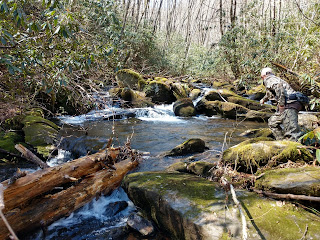 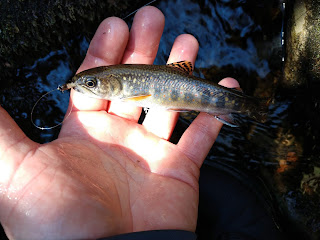 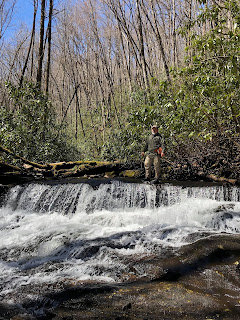 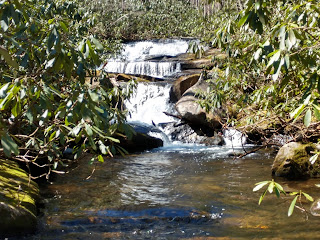 We had a fantastic time exploring and fishing this little creek and hoped to fish all the way through to another trail that we could hit and walk down to the main trail and back to camp. Well it did not work out that way and we could not find the upper trail. After much climbing, thicket busting and a few choice words we decided to just head back down the creek. Climbing back down all those plunges and waterfalls was no fun at all and by the time I got back to camp I was completely and totally whipped. We heated up our supper, I had a Backpackers Pantry Pad Thai that was really good, and got ready for an early night and early hike out.

I slept warm and snug the last night even though the temperature dropped even more and was 21 when we got up the last morning. My gear is rated to 20 degrees and I put it to the test, it came through with flying colors. I was not cold at all this trip, at least not in the hammock. We didn't waste anytime breaking camp and hitting the trail and the brisk walk out warmed us right up. I have to say that this was about as good a season opener as possible. Though we did not catch a bunch of fish we really had a good time, our gear worked great and I found a new blue line to hit a little later in the spring. I am already planning the next trip! See you on the creek, Chris 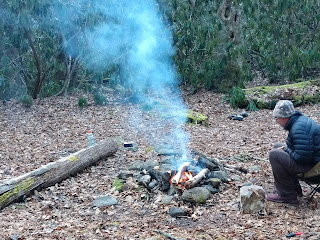 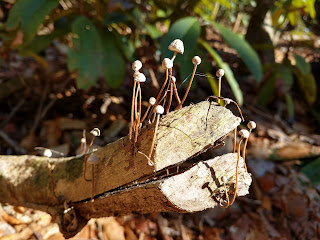