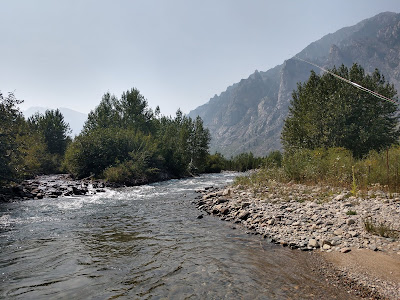 In my last post I left off with Joe and I camping beside the East Rosebud Creek and planning an early morning hike to a high mountain lake to fish for golden trout. I was following the weather and honestly it was not looking good, there was a cold front moving in with a high percentage of rain with temps in the 30s and possible snow in the higher elevations. That evening, Saturday August 25th, we were pretty worn out. We had put in a lot of miles, fished hard and had a fairly grueling hike ahead of us in the morning, with possible bad weather, so we turned in early that night.

Before I get to the next part I have to back track just a bit. For this trip I wanted to bring my tried and true Therm-a-rest Z Lite foam sleeping pad but it just took up too much room in my suitcase. I researched and decided to try an inflatable pad, all the big time hikers bragged on how the new generation of inflatable pads were fantastic and bomb proof. The top pick was the Therm-a-rest NeoAir xlite but with a price tag starting at $120 it was just a little more than I was wanting to spend. So after doing my research I bought an Outdoorsman Labs ultralight inflatable pad it is a $40 pad that got stellar reviews. Admittedly you have to be careful with Amazon reviews, a lot are done by people receiving free gear just for their reviews.

Back to the Rosebud, as I said we were wiped out and ended up going to bed at 8:30. We were sleeping in Joe's Marmot backpacking tent, my cheap pad was comfy and the temps were in the high 50s, perfect to get a good nights sleep. I instantly fell into a deep sleep only to be awoken at 10:00 with a frozen butt and hard lump, root or rock, gouging me in the back, my bargain pad was almost completely flat. I unwrapped from my quilt and blew it back up, of course waking Joe up in the process, and in 15 minutes it was flat again. My son was the true gentleman and offered me his very much still inflated Therm-a-rest pad and offered to go sleep in the car. I declined and went and got in the car myself and preceded to have one of the worst nights sleep I have had in years. I laid the back seat down and curled up in the back, with no pad it was hard as concrete, and getting down to very close to 40 degrees, very chilly. A pad system is absolutely needed if you use a quilt so there was a cold draft up my backside all night.

The next morning it was 42 degrees, windy, with clouds rolling in. I had no working sleeping pad and snow forecast for the elevations we would be backpacking in, Joe and I made a combined decision to pack it in and head back to the house. I was a bit disappointed but have to admit, really looking forward to a good nights sleep in a warm bed. Instead of hiking and camping beside an alpine lake we drove 4 hours back to Great Falls so Sunday was pretty much a wash out.

Time for plan B. I had been interested in this area along the Continental Divide Trail so decided to give it a try.

We got up to a cold, windy and rainy Monday morning but decided to go anyway. If we did nothing but explore the area and see if it was worth going back to then it would be time well spent. When we got up into the mountains it was 38 degrees and spitting rain but Straight Creek looked to good to not try. Looks were right, it was full of small, 6 to 10", brook trout. With all the fishable streams here, zero crowds and good trails to access the water, namely the CDT,  this was for sure a place I wanted to come back to.

On the way in we had passed some through-hikers and stopped to talk with them, they asked if we would give them a ride into Augusta on our way out, which of course we were willing to do. After fishing in the rain for a couple of hours we were absolutely sure we wanted to come back to this area, we walked back to our vehicle and started home. When we got to where the hikers were when we were going in they were already gone, must have caught another ride, but two new hikers were there so we gave them a ride. They were through-hiking the CDT and had started close to the Mexican Border two and a half months ago and had another 200 miles or so to make it to the finish on the Canadian border. It was very interesting to talk to these guys, Joe and Kyle, and pick their brains about their equipment and what it is like to be on the trail for that long. These guys are true endurance athletes and averaging 20 or more miles a day for days on end carrying a backpack and sleeping in the woods every night. I am truly fascinated with through-hiking but I don't think it is for me. I do enjoy watching youtube videos about it though. One of my favorites is Dixie, from Homemade Wanderlust she is finishing up the CDT now if you want to check it out.

The next morning it was much better weather with mostly clear skies and warmer temps so we headed back into the Bob Marshall planning to hike a few miles up the CDT then drop off the trail into the North Fork of the Sun river and fish back to the trail head.


Even though there was some fantastic looking camping spots, one next to an alpine lake with trout rising all over it, we were close enough to drive back home and enjoy a night in a bed. We had hiked and fished hard and were foot sore and worn out. I had taken a pretty bad fall in the creek and my left thumb and knee were banged up so wore out and battle weary we headed home.

After two days hiking and fishing the Bob Marshall Joe and I were both getting pretty tired, we had covered a whole lot of ground and fished extremely hard and were ready for a break. We decided to sleep in on Wednesday and Thursday, do some exploring and fish a fairly local stream. Fishing was very good even though the wind was a bit harsh. For brevity reasons, I've been rather long winded, I will just add Wednesday and Thursday's pics together.


I know this is poor fish handling and I am sure I will hear about it from the purists but I am going to share it anyway. This was the last fish of trip, Joe had lost his fly and was just videoing me fishing. I ended up catching 3 nice cutts out of this small hole, gives you an idea of the size streams you can catch quality fish out of in Montana.


Another video that needs no description, and nope not a bit ashamed.

On Friday I recovered gear, washed clothes and the rental vehicle and packed for the trip home, I had a very early flight on Saturday morning. Joe's girlfriend, Amber, came up and we cooked chicken tacos and watched cheesy movies for the rest of the day. A perfect ending to a fantastic trip. I am so unbelievably thankful to be able to spend time with my son in such a perfect place and we are already looking forward to next years adventures. See you on the creek, Chris