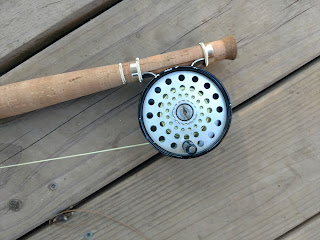 Growing up in a very small town in the rural Appalachians there wasn't a whole lot to do besides fish and hunt, and believe me I did, but you can't fish and hunt all the time.  The town I grew up in, Andrews North Carolina, there is one short main street and the main thing kids used to do was to ride up and down through town and hang out in various parking lots hoping to figure out something to do, me and my friends were no different. On warm summer nights we spent most of our time in the drugstore parking lot sitting on the tailgate of a truck watching everyone else riding up and down main street, I know it sounds boring but we thought it was great fun.

One of these evenings me and Frank were sitting on the tailgate of Frank's truck at Turner's Drug Store watching the traffic go by, one of us spotted a very large dead rat laying in the gutter. Of course we started trying to think of what kind of fun we could have with that dead rat. Our fly rods were behind the seat of Frank's truck, we had been fishing earlier. Putting one and one together, I'm not sure if it was me or Frank, but one of us hatched the idea to take Frank's fly reel off his rod, a Martin model 61 just like the one in the picture, tie the line around the rat's neck and throw it across the road. When a car got close we would pull the rat across the road in front of it. I have no idea what we thought would happen but we figured it would be fun. So we were having a good time swinging that dead rat across the the road and pulling it across in front of cars. As I remember, none of the cars paid much attention to it but we were having fun anyway. One of our other friends showed up to sit in the parking lot with us and asked what we were doing. We laid out our dead rat on a fly reel plan and of course he thought it was a fantastic idea as well and wanted to give it a try.

So Frank handed him the reel with the dead rat on it, Kenny swung it around a couple of times and flung it across the road. It wasn't too long and here comes a car cruising down main street and Kenny starts pulling the rat across the road, but he was holding the line up a little high and it caught on the bumper of the car. Friends, I am here to tell you, you might have caught big fish and heard a fly reel pull drag but you have never heard one scream until you catch an 83 Buick using a dead rat for bait.
So there stands Kenny holding that old Martin reel, it screaming like a banshee, until it hits the end of the backing and snatches out of his hand. I remember like it was yesterday, us standing there not saying a word watching that car headed down the main street of Andrews North Carolina with Frank's Martin model 61 bouncing along behind it on one side and a dead rat dragging behind on the other.

We never saw that reel again but surfing around on Ebay I saw the one in the picture and for $14 shipped I couldn't resist. These old Martins are solid reels, no fancy drags but just a simple click pawl reel that will work fine for most trout fishing. Everytime I take it out and use it I can remember that summer night in the early 80s at Turner's Drug Store Parking lot and hope I catch a fish that can make it squeal as loud as that car did.