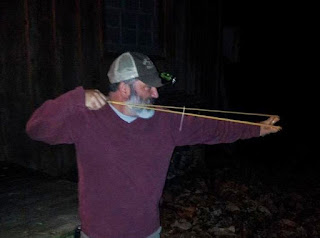 We have talked about fly fishing, backpacking and hammocks so I thought I would talk about another hobby/obsession of mine and that's slingshots, making and shooting them. Yup, you read that right, slingshots, the kid's toy that Dennis the Menace carried in his back pocket and tormented Mr. Wilson with. Well I loved slingshots when I was a kid and never grew out of it, not sure what that says about me or my maturity level but hey at least I admit it.

When I was in the Army I carried a slingshot practically everywhere I went and it came in handy more than once. When I was in Egypt there were wild dogs everywhere and they were a huge nuisance. A few well placed lead balls and they learned quick to stay away from my site. On another deployment to the middle east my favorite pastime was hunting rats with my slingshot. I had a fairly sophisticated method, utilizing state of the art equipment. At night I would find an elevated vantage point, tailgate of a 5 ton truck was perfect, I would put out left over MREs for bait and use NVGs to watch for customers. MREs are Meals Ready to Eat and NVGS are Night Vision Goggles, I had a distinct advantage I could see in the dark so the rats were not scared off by light. I killed some whoppers, if memory serves the largest was 15 inches nose to tip of tail. 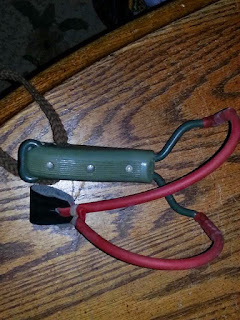 One more Army story and I will quit boring Y'all. When I was stationed in Arizona I was put on a detail to test out some new gear that was getting fielded, so me and another Soldier were working 12 hour night shifts in the motor pool. The testing involved hooking up test gear and letting it run for several hours at a time so we had a lot of spare time. There was nothing but open desert behind the motor pool and tons of cottontail rabbits so naturally putting two and two together I started bringing my slingshot with me. Mike, the other Soldier on duty with me, would hold the light and I shot the rabbits. One night I had killed two rabbits and had them cleaned and hanging in a plastic bag in front of the AC, our Lieutenant came in early that morning and saw them. It is a 1000 wonders I did not get charged with animal cruelty or some other charge. I still have the slingshot I carried for so many years and around the world, don't shoot it anymore but wouldn't get rid of it for anything.


My first slingshots were homemade by either my father or grandfather. Probably about 1976 or 77 I saw a movie, The Savages, and the hero used a wrist braced, tube banded slingshot to survive in the desert and beat the bad guy. Between that and Wrist Rocket adds in the back of outdoor magazines I had to have one of these new super slingshots and pestered my dad till he got me one. Well fast forward 40 or so years and I have discovered that the humble forked stick slingshots are my favorites and are just as accurate and are actually more powerful with the homemade bands I make. The slingshots I use now are pretty much exactly like the first ones I shot as a kid, better finished but still homemade from a forked tree branch. My current favorite is one that I cut from a laurel bush on a fishing trip, ok actually rhododendron but if you are where I am from it's laurel, with a red cedar butt cap and my shot pouch. 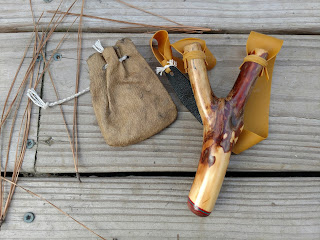 Here is a pic of a few more I have made. 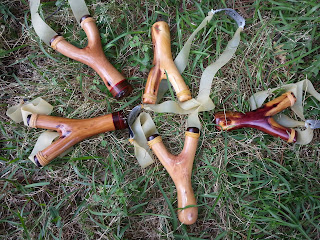 All of these are banded with my favorite band material that I cut from either latex sheet or theraband exercise bands. My homemade bands will send a .40 caliber lead ball at speeds approaching 300 feet per second but still have a surprisingly light draw. They do have a disadvantage, they do not last as long as the tubular bands, but they are easy to make and rubber is cheap so I will stick with them for the lighter draw and faster speeds.

Slingshots are a lot of fun and easy to make but if you just don't have the time or inclination then there are places on the web where you can buy much better slingshots and supplies than the box stores sell. Simple Shot Shooting Sports is a great place for all your slingshot needs and is ran by a friend of mine, Nathan Masters, who is a hell of a trout fisherman as well, one of these days I will tell the story of him throwing his rod down and going swimming for a big rainbow.


If you haven't shot a slingshot since you were a kid or are like me and are just an older, slower kid give slingshots a try. I will leave Y'all with a video of my shooting, I am not a great shot but like that old blind squirrel, I do find an acorn now and again.